I presented my composition Transmogrified Strings at the NIME 2015 conference. Here is the full-length version now, and it is suggested to wear headphones when listening.

Transmogrified Strings has been presented at the

Transmogrified Strings is a music composition that explores the affordances of the FireFader, a new and open-source musical interface based on haptic technology. The composition is written for a single performer and lasts about 9 minutes. Transmogrified Strings also explores new sounds through the technique of audio-rate modulation of physical model parameters. The present page describes the concept of this eight-channel music composition as well as the technical specifications. The performance extends technique for expressive musical control using linear faders, while leveraging new technology in portable haptic interfaces and simulation of virtual acoustical systems.

Technology is transforming new music and sound art. Typically the technological development emphasis for music is on software because it can easily be shared via the Internet; however, as software becomes more complex and internetworked, we find ourselves drawn further inside digital and virtual worlds. Yet at our core, we are physical beings who breathe the air and live on this earth; therefore, we should use tangible interfaces to interact with software. Haptic force-feedback devices can provide an exquisite physical and tangible connection to software, yet many questions remain about how to program these devices. In music, another way of framing these questions is to ask, “How can haptic force-feedback devices best enable and support expressive new music performance?” Transmogrified Strings aims to help answer this question by investigating it in the context of plucked string sounds. For the composition, a series of virtual plucked string instruments have been designed, which have been made tangible via the FireFader haptic device.

Regarding the music composition itself, Oxford Dictionaries defines transmogrify as “Transform, especially in a surprising or magical manner.” This is the core concept of Transmogrified Strings, which aspires to surprise the listener with sounds that are both new yet uncannily familiar. In each section, virtual plucked string instruments are transformed via a specific kind of operation. For example, strings can be tuned as low as 0.5Hz or as high as the upper bounds of human hearing. The virtual strings retain their tangible character even as the sound changes drastically, and the feel of the instruments changes too, which in turn affects the performer’s interaction with the virtual strings. The composition is organized into various sections, each of which is preceded and punctuated by the strumming of a harp. As the strings are transmogrified differently in each section, they are specifically

The haptic device employed by the performer has been custom made for this composition. It consists of a clear, plastic acrylic box that houses four FireFader boards. It provides the performer with a total of eight faders that can provide force-feedback. 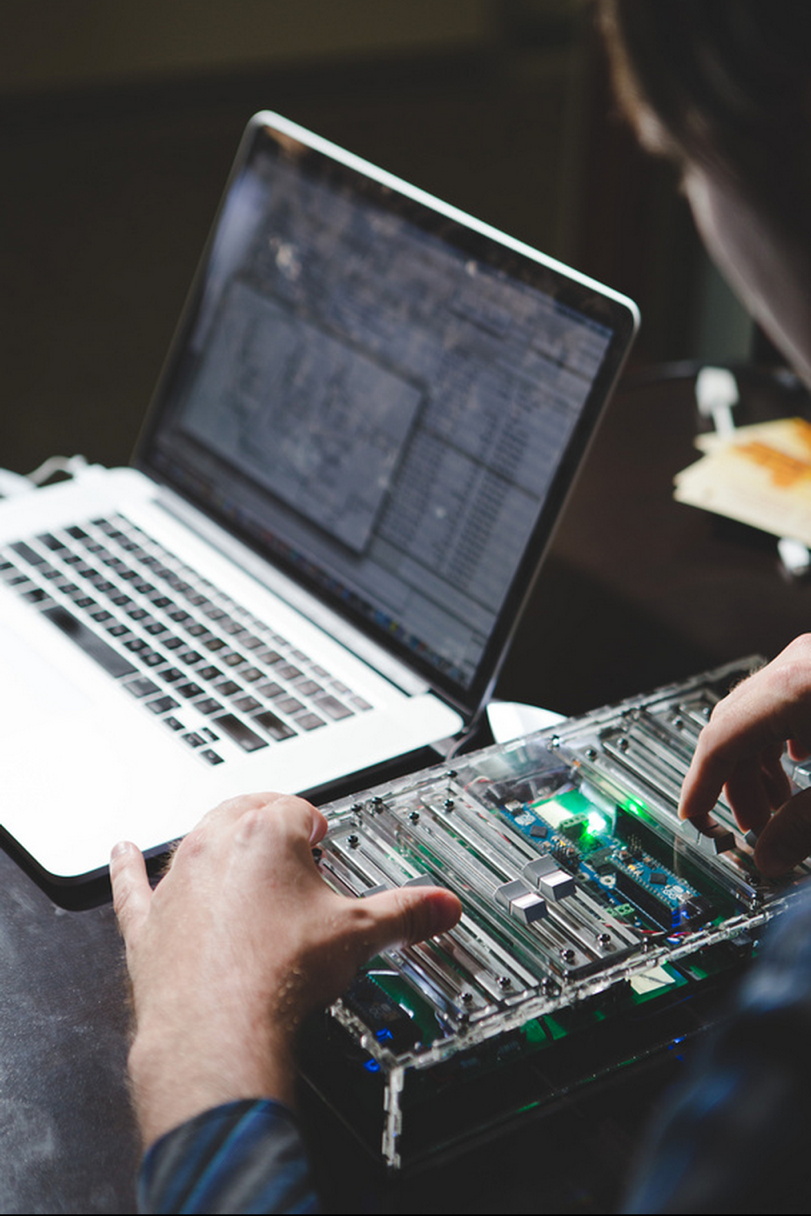